In January 2021, Qatar Museums’ Department of Archaeology made an exciting discovery at Asaila, an ancient site located in the western part of Qatar. As excavators were digging near a burial mound dating back between 300 BCE and 300 CE, they unearthed the remains of several individuals surrounded by jewelry, tools, and sacrificial animals. The discovery of this tomb provided important insight into burial practices and, more broadly, ancient life in Qatar, which has long been shrouded in mystery. As the Qatar Museums (QM) team continues to excavate not only at Asaila, but throughout the country, puzzle pieces of the past are slowly being connected, revealing a fuller picture of the nation’s rich heritage.

Cultural heritage, or the remains that have passed down to us over time, is essential in connecting communities through their shared history. To recognize the importance of heritage, UNESCO designated April 18th as International Day for Monuments and Sites – also known as World Heritage Day. This year’s theme, “Complex Pasts: Diverse Futures,” acknowledges heritage’s ability to convey previously untold histories. As Qatar transformed from a modest hub for the pearl-diving industry to a modern nation, the landscape became dominated by modern constructions, belying the country’s ancient archaeological remains buried underneath. While excavations have been carried out in Qatar since the late 1800s, recent efforts by QM demonstrate Qatar’s commitment to further revealing its hidden past.

A Brief History of Archaeology in Qatar

Qatar was first excavated in 1878 by British officer Edward Law Durand. However, large-scale excavations were not carried out until the 1950s, when foreign excavation teams from the United Kingdom, Denmark, and France began traveling to the country. In the 1960s, major excavations were undertaken by British archaeologist Beatrice De Cardi, who was invited to collect material for Qatar’s new national museum. Inaugurated in 1975, this museum covered Qatar’s past from ancient times to the present – it was later reopened as the National Museum of Qatar in 2019. The establishment of the museum was important in providing a narrative of Qatar’s history and promoting Qatari national identity, especially following Qatar’s independence in 1971. While the nation began to modernize, the national museum reminded Qataris of their shared heritage and the country’s historic roots.

In the 1980s, local Qatari teams took over archaeological excavations within the country. Qatar also enacted its cultural patrimony law in 1980, which vests ownership of all archeological artifacts in the state and further protects the country’s heritage. More recently, QM’s cultural heritage division has collaborated with international research institutions, such as the University of Copenhagen and the German Archaeological Institute, to further excavate and record the country’s archaeological sites.

Murwab, located in northern Qatar, is a medieval Islamic settlement thought to have been established under the Abbasid dynasty in the 9th century CE. The Abbasids succeeded the powerful Umayyad dynasty and ruled from their capital in Baghdad. The site contained 220 housing units, workshops, mosques, and a large residence – the oldest Islamic palace to have been discovered in Qatar. Fine ceramic and glassware shards found at the site suggest its inhabitants’ prosperity and prominent social status.

First discovered in 1957, Al Jassasiya is home to rock carvings known as “petroglyphs.” It is one of several sites throughout the country containing these impressive petroglyphs, which often take the shape of rosettes, stars, and boats. Archaeologists have even theorized that cup marks found in the rock might have been used for games such as mancala, also known as Al Haloosa or Al Huwaila.

One of Qatar’s most important sites and a symbol of Qatar’s pearling heritage, Al Zubarah was a major center for industry and commerce in the 18th and 19th centuries. Its iconic fort was built later, in 1938, by Sheikh Abdullah bin Jassim Al Thani. The site reflects Qatar’s history of trade and cultural exchange, as merchants from across the Indian Ocean, Arabia, and Asia brought their goods to Al Zubarah.

In collaboration with researchers from the University of Copenhagen, the Qatar Islamic Archaeology and Heritage Project studied the site, which was successfully nominated for UNESCO World Heritage status in 2013 and became Qatar’s first World Heritage site. More recently, Qatar Museums has been working diligently to protect the site from the extreme desert and coastal conditions for Qataris and visitors alike. 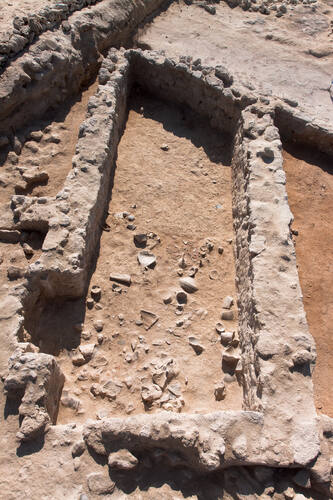 The Future of Heritage in Qatar

Qatar’s National Vision for 2030, written in 2011, underscores the need for increased research and preservation of Qatar’s heritage sites. It states, “Throughout Qatar’s recent socioeconomic transformation, the country’s cultural heritage has increasingly been seen as an important stabilizing force, representing a common bond among citizens and acting as a counterbalance to rapid social change. Heritage is an irreplaceable resource, so cultural resources must be safeguarded for future generations.”

Since 2011, Qatari archaeologists, led by QM, continue to carry out excavations and have restored several buildings and mosques across the country. QM also launched a national database to record the country’s rich heritage sites. There is still much yet to be uncovered and important questions waiting to be answered, demonstrated by the recent discovery at Asaila. As Qatar Museums continues to research, protect, and promote Qatar’s cultural sites, Qatar’s valuable past will be further shared with the world, while also connecting Qataris around this shared heritage.

Culture Delivered to Your Inbox